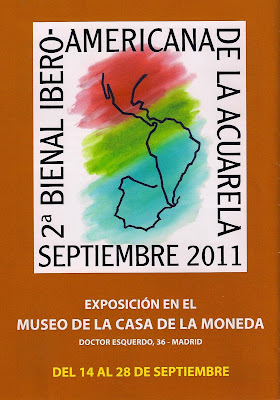 North American Watercolor Artists (NAWA), Mark Mehaffey, Nicholas Simmons, Keiko Tanabe, Carol Carter, Thomas W. Schaller, and Kathleen Alexander, will be representing the United States in the 2nd Bienal Ibero-Americana de la Acuarela in Madrid, Spain. The exhibition will be held at the Museuo de la Casa de la Moneda, September 14 through 28. This is the second international exhibition NAWA has participated in together. The first was in Mexico City at the Museo Nacional de la Acuarela; this museum has included Mark Mehaffey and Kathleen Alexander’s paintings in their permanent collection.

Things You Need to Know

Get the paintings emailed to you as they post. Email:

Promote Your Page Too